The AG Film Festival, or Film Night as it was originally called, has been growing for several years, and has become increasingly popular with both our own resident film makers and our local viewing public – the 2015 Festival was such a resounding success that 2016’s event is eagerly awaited!

Entries are NOW being taken for the Aveton Gifford Film Festival 2016.
Would YOU like to submit your film? 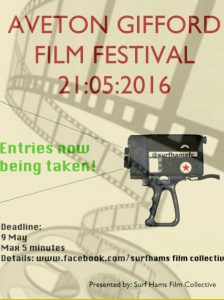 All we ask is that films are family friendly and they are 5 mins max.
Here’s how:
Dropbox/Wetransfer or email the file by 9 MAY to;       [email protected]     (Put Film Festival in the subject field.)
Or send a DVD to us – email us for details – and we’ll do the rest.
Or if you know Jim Neal drop it with him.
Looking forward to seeing you and your films!
https://www.facebook.com/events/1096998653693098/
https://vimeo.com/surfhamsfc