Things are really gearing up towards Christmas this week in A.G with Santa making a surprise early visit, so I hope that you have all been good boys and girls! It was  also time to start the village’s Christmas celebrations with the annual carol singing and parade through Fore Street. Starting at the village hall Michael Tagent led us in prayer and song as we moved down the street, singing carols as we went. The turnout was very good this year, with young and old joining together in the spirit of Christmas, and enjoying each others company in spite of the rain. As everyone gathered outside of the Fisherman’s Rest Mr Tagent blessed the tree, and the lights were duly turned on. The happy band then made its way into the lower bar at the Fisherman’s Rest for mince pies and mulled wine. The Taverners Drama Group  performed some traditional Chistmas songs and readings. Two young members of the group stood out as they sang and played piano; Charlotte played a cheeky piano duet with Penny, which was received with rapturous applause, and young Bethan sang a beautiful rendition of Mary’s Cradle Song, a real tear jerking moment – so well done to our bright young stars! 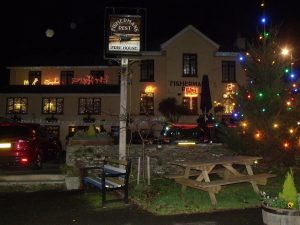 Staying with the Fisherman’s, Rest the usual December quiz has been cancelled but there will be a Curry and Quiz night on Christmas Eve, starting at 7pm.

The Parish Council met this week and Tim Abrahall took the chair due to John Brooks’ absence.. The cost of putting a path around the playing field was discussed, as was the width of the path, which has been a subject of discussion in the village. It was decided that a width of 4ft would be sufficient and further enquiries will take place as to the cost. The plan to put a footbridge over the river was also discussed and the council is waiting for news from a prospective contractor. The possibility of putting a tarmac skateboard ramp on the green seems to be moving forward, watch this space! The council finances were discussed and a Precept meeting will be held sometime in January. Both County Councillor Richard Hosking and S.H.D.C Chairman Ian Bramble  were present to advise the council on various projects.The all important Watershed meeting that members of the Parish Council had with local M.P Gary Streeter was discussed and was deemed very useful. The Parish Council will send Mr Streeter a letter of thanks, but will also advise him that SWW has not yet replied to several queries raised on the night. The  surface water from the school, hall, and car park will be taken out of the system in a works program due to start early in the New Year.

With Christmas fast approaching, St Andrew’s Church has a full catalogue of services available, and a leaflet is circulating in the village.If you have not received one please contact me on the above number and I will gladly  give any details to you.