Did anyone spot last weeks deliberate mistake? I did say that the Firework display was on Friday …… oops I seemed to lose a day somewhere! Well A.G’s wonderful food and firework night was very much a success with hundreds of people from the village and surrounding area turning out to join in the fun in spite of the really poor weather conditions.The ground was very sticky underfoot but it was nothing a good pair of wellies couldn’t fix, and all age groups enjoyed splashing in the mud! There was a huge queue for the delicious food on offer; burgers, sausages and soup were duly served by our friends at the Fisherman’s Rest, well done to them for keeping up with the demands of a hungry public! 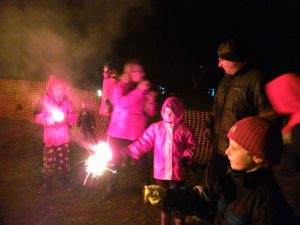 The bonfire was lit at 6,35 while the food was being served; those not eating were having a good family time which included sparklers for the kiddies and some of the bigger kids too! The firework display commenced at just after 7.0 and the effects were truly exciting, colourful, and really professional. My son John, accompanied me for the first time in a while as he wasn’t working, and he remarked on the quality of the display and all around us people were cheering, and the level of excitement was very intense. Well done to everyone who organised this wonderful event. I took a video of some of the fireworks and this is now on the village website for all to enjoy .

This last Sunday was Remembrance Sunday and A.G’s Act of Remembrance started at the War Memorial with Rev. Neil Barker leading the tributes to the fallen. British Legion representative, Mr Brian Yabsley read the names of the War Dead and the tribute. The congregation then made its way into St Andrews, lead by the Churchwardens. 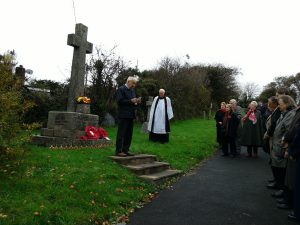 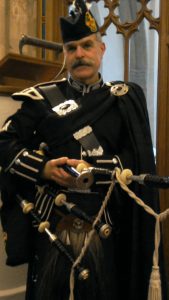 This years commemoration was made particularly special by the presence of piper Keith Lacy Nichol, who played very beautiful music during the service. Mr Lacy Nichol lives in Plymouth but comes to St Andrews for worship quite regularly accompanied by his two little dogs.Also during this years service A.G’s British Legion Standard was laid up in the church. The village no longer has a Branch of R.B.L but shares branch responsibilities with Modbury.

The shop A.G.M will take place on tonight at 7.0 pm in the village hall. Our shop is community owned and as such it would be nice to see some more of the villagers at the meeting. Its YOUR shop and more support would be appreciated. There may well be items on the Agenda that need to be voted on by the shareholders, and if not enough people turn up there may not be a quorum to achieve this, so please support the meeting.

Devon and Cornwall Police have issued a warning in respect of scam phone calls. Callers are pretending to call from official bodies, such as the Police or banks and obtain bank details from unwary people.The victims are mostly elderly and some have been taken for large sums of money, so please be on your guard and don’t give out these types of details over the phone.

St Andrew’s will have a lay led Morning Prayer service starting at 11.0 am and I have put some more photos of the events on my Facebook page.