Last Saturday the Annual Film Festival, organised by Surf Hams Film Collective, was held in the village hall. There were 16 entries in all, covering a multitude of subjects. My personal favourite was  Pool Shark, which was animated and the song of the same name played as a background and it contained some timely reminders of keys, have you guessed who submitted that one? Yes, none other than our multi-talented Parish Council Clerk, Peter Javes! It was not to be for Peter though, as the  thought provoking movie “The Boy Without a Face”, made by Jim Neal got the better of him and the other entrants. The film explored the loneliness of a young boy and followed him into adulthood, which was quite a chilling tale really. The fact that it was filmed in our churchyard did add an air of suspense which gripped the audience, well done to Jim and his son Isaac in producing a very different winner this year. 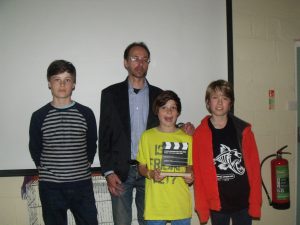 One  of the films in the festival did also touch on the perennial problem of dog poo in and around our parish. Last weekend ,whilst walking my dogs back through the village green, I was disappointed to see such a lot of poo on and around the paths. I did the thing of picking up and I was quite astonished that after a short while, I had collected about half a carrier bags worth of you know what.!! Also I was also disgusted to find quite a significant amount of dog waste in our churchyard! Please pick up after your dog and spare a thought for people who are visiting their loved ones graves, they really don’t want to find dog mess in that area. Please respect our churchyard, it is not a dog exercise field!!!

St Andrews is holding an ‘Open Church’ weekend on the 4/5th June to celebrate the Queens 90th birthday. There will be delicious teas available between 2-4pm on both days, and the church will be filled with floral displays made by the church flower ladies. Put this date in your diaries, it would be a shame to miss this lovely event.

The Kingsbridge Jazz at Aveton Gifford monthly meetings have become increasingly popular, and an idea to help hungry club members and non members is to be tried out at the Fisherman’s Rest. The new Early Bird menu will be available between 6-6.30pm on club nights, and when pre-ordered will give Jazz fans a superb choice of food all ready and waiting in time for the evenings proceedings to start. More information can obtained from the Fisherman’s Rest on 550284. Next months musical guests are the intriguingly named Slide by Slide.

This week there will be no service at St Andrews but there will be a Team Service  with Holy Communion at Bigbury starting at 10.30am