It was an absolute pleasure to take a trip down to the Fisherman’s  Rest last weekend for the Annual Cricket Club dinner. After meeting in the bar for drinks, folk sat on the Boat Deck restaurant for dinner. The food had been beautifully prepared by Athenia, Libby and Annie, and everyone seemed equally pleased with their meals. After dinner everyone settled down to listen to Chairman Jon Dickey’s address.It seems that our White Army did very well during last summer, their main opponent being the weather which was responsible for the cancellation of several matches. When the boys were able to play, they did really well winning 4 matches and losing 5. There was an unfortunate abandonment of one match due to a serious injury to Jon Dickey –  all is now well with him. The boys had note-worthy victories over South Brent and East Prawle, no mean task for anyone. The team are experiencing problems in getting enough players, as are other smaller clubs. Mr Dickey also paid tribute to local landowner Jim Irish, who donates the Shooting Field to the club for home matches. Sadly Jim has been unwell recently and could not attend the dinner. Wishes for better health were expressed by everyone in  the room and he was thanked in his absence for all that he does for the club. Until recently Jim would play for the team and organise the President’s Day match, a truly great village day out for all. This year’s recipients of awards were; Best Batsman James Shepard, Best Bowler Rod Laidler, winner of the Sid Cox trophy was Johnathon Reynolds and this years Player of the Year award was received by Gary Dayment. The captain for this season is Peter Shepard and Vice Captain is Gary Dayment. The Cricket Club also wish to thank Mark and Athenia for their efforts on the night and for their support and their patronage over the past few years. 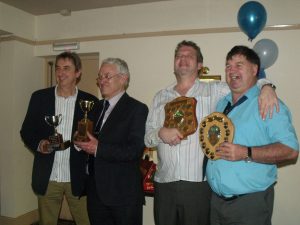 There are some more Cricket Club Pictures on my Facebook page.

Some diary dates; Quiz Night is back in the Fisherman’s Rest on the Thursday 11th February, closely followed by Soup and Puds in the Hall on 13th  at  12-2.30pm,  and on the  23rd    Knit and Natter will be in the Fisherman’s  from 10-12 am – more details will follow later.

The Parish Council met on Monday and heard that there is some confusion about the Neighbourhood Plan. The Plan will invite parishoners to help shape future development of the Parish for the next 15 years. All Parishes, towns and villages countrywide will have to provide such a plan  so that the local area will be represented  in any future developments. This is not to be confused with the Parish Appraisal, which took place 3 years ago. The Neighbourhood Plan is a legal requirement for parishes, and a good local response is essential to future plans for the parish. The consultation day will be held on February 20th in the hall from 10.am till 4pm. Refreshments will be available all day, so please come and have your say included in the future plans for A.G.