Last weekend was a very busy one for our community. St Andrew’s church held a Plant Sale and Coffee evening in the hall on Friday attracting a large number of folk looking for their colourful summer plants, some of which were grown locally in the village. There were also the usual stalls, and of course delicious cakes and drinks. The final total raised for Church funds is not known as there are still some funds to be collected, but the evening total was over £360. Many thanks to all who helped to man the stalls and serve refreshment

On Saturday evening, the 3rd Annual Surf Hams Film Collective Film Festival was held in the hall. There were a record number of entries this year, 15 films in all, covering a range of subjects from precocious pets and a haunting ghost story to magnificent animation. The hall was packed with people, not a ticket left to be had anywhere, and the standard of the films was exceptional; the trouble taken over them was evident in the high quality of the finished items. In every competition there has to be a winner, and this year young Jenny Abrahall’s animated film “Game of Cat and Man” topped the list. The film was inspired by Jenny’s love of Wallace and Gromitt and she did the genre more than justice with her film, showing her plasticine hero’s in a very favourable light, thus ensuring the coveted Film Reel trophy would indeed be staying in A.G this year. Well done to Jenny and all the other entries, which can be viewed via a link on the village Facebook page. 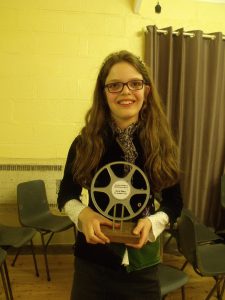 The  Aune Conservation Association is to hold another litter picking session on the Tidal Road, Sunday May 10th between 3-4pm, at low tide. The last such event managed to remove an awful lot of rubbish in this short space of time. Pieces of plastic which blow up the river in stormy weather can represent quite a hazard to wild life, so please turn out to help clear this beautiful area of this and other waste.

A.G’s Cricket Club will start their 2015 campaign on May 10th, playing Cornwood in an away fixture. The match will start at 2pm. The Cricket Club will also have  their annual fundraiser, the Big Car Boot on May 17th   9.00 am till 1.00 pm. The buyers parking will be free and refreshments will be served from 8.30 am; more details to follow.

A request from Dinah : Can the person who leaves dog poo outside the shop in black plastic bags please remember to pick it up and put it in the bin. All bins in the parish can now be used for doggy bags and there is a dog bin on the rectory gardens opposite the  tennis court.