This month has been a busy one for Aveton Gifford and it never ceases to amaze at just how much our community has going on through the year. This past week has seen our lovely children from the school and pre school perform their brilliant Nativity plays.

The story was kept to the traditional message of  the Nativity with some modern music, including a very clever performance of  Let It Go from the popular film Frozen. The children were dressed as Ice Elves for the singing of the song and looked the part with lots of tinsel and flowing white dresses. The quality of the singing and the confidence with  which the youngsters  performed was truly amazing, an inspiration and a testament to all the hard work put in by staff and pupils of our school. The Church was packed with friends and relatives for the Tuesday evening and Wednesday afternoon performances and it was wonderful to see everyone enjoying themselves so much. 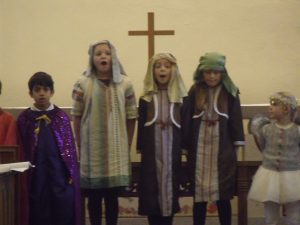 Its been a mixed year in some ways with the weather in August having been so lovely, rain really putting the kibosh on the Classic Car show this year, and also the Music on the Green which ended up being Music in the Fisherman’s ( which proved to be a popular move).We also have had to say good bye to some old friends in the village as time moves them on, but all in all I think we have had a good year here in A.G, and a lot of exciting news has come my way as I visited Cricket Club events, Jumble sales and all sorts of  village goings on, and it’s been such fun.

I expect we all have our favourite times and as this year draws to a close, there is an opportunity to go to one more event down in the Fisherman’s Rest as the New Year is welcomed in. The Raggle Taggle Band will be in residence in the pub on New Year’s Eve, and Steve’s Disco will be there too to make sure  the old year is seen off in a rousing style . Many Thanks to everyone who has supplied news stories and details of events over the last twelve months, and Happy New Year to everyone.